How to Help Your Child
Sleep Alone Without Anxiety

Although it is common for a 6-12 year old child to be afraid to sleep alone at bedtime, they can learn to sleep on their own with the right kind of help. Learning to conquer their fears is an important step in developing self-confidence and independence that will spread into all aspects of their lives. That's why, as a child psychiatrist with over 30 years experience, I created a method to help your school-aged child learn to sleep alone feeling confident and happy.

The Child Who Is Afraid to Sleep Alone

It started innocently enough .. Your child was too afraid to sleep one night for some reason, perhaps a nightmare, or perhaps an anxiety-producing event at school, perhaps a scary story they heard from a friend or on a video. Then, one night led to another and now your child has developed a fear of sleeping on their own. They need you to stay with them until they fall asleep. However, they are afraid to sleep alone and they are uncannily aware of when you try to leave. 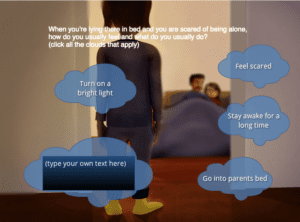 Your words of reassurance don’t seem to have any effect. Comforting just seems to make them more dependent on you being present. Maybe you succeed in getting your child to stay in their bed, but you are concerned because they are taking an hour or more to fall asleep and they look increasingly tired the next day.

In their own bed your child may be afraid of the dark, afraid of someone breaking in, afraid of bad dreams or scary stories, afraid of sounds in the house or of monsters or zombies.

Maybe your child started coming into your bed during the night without you even knowing (or you were too tired to deal with it), and the next morning .. Surprise! There they are, happy as a clam!

If it goes on long enough they may refuse to sleep in their own room altogether. With enough tears, anxiety and upset you found it easier to let your child sleep in your bed because, after all, that’s where they always end up anyway! Or maybe you reached a compromise and allowed your child to sleep on a makeshift bed on the floor for now. You’ve tried being firm, maybe even applied punishments or rewards, all to no avail.

It’s understandable that you, as a parent, may be feeling increasingly concerned or frustrated. You may be getting tired of the arguments, the distress, the nights of disrupted sleep .. and you need this to stop.

How Common Is It?

Fears at bedtime are very common1. A study by Gordon, King, Gullone, Muris and Ollendick2 (2007) found that 64.2% of children and adolescents reported having nighttime fears. Another study (Owens, Spirito, McGuinn and Nobile3, 2000) reported the prevalence of significant sleep problems in children to be 37% in the general population. These are HUGE numbers. It means that 2 out of 3 children will have fears at bedtime at some point in their lives, and that 1 out of 3 children will have significant issues about going to sleep.

The goal is not merely for your child stay in their own bed at night, but for them feel comfortable, confident and unafraid of sleeping on their own.

Understanding Sleep Anxiety in Your Child

Anxiety at bedtime is not ..

When we go to bed for the night we stop doing the things that keep our minds busy, which frees up our minds for thinking and imagination – for better or worse. Children think about things too, but their imaginations are much stronger and more vivid than adults. They realize that there are scary new threats in the world of which they were unaware before. Furthermore, they don’t have the life experience to know which things pose real threats and which do not.

So, when another child at school tells them the story of “Bloody Mary” who comes out of the mirror at night, or they watch a YouTube video about zombies, your child’s imagination can make things seem very real and frightening at night. If they hear about a murder or a child abduction on TV their natural tendency is to imagine it happening to them.

The Fear of Sleeping Alone Results From Three Types of Problems

The primary issue in separation anxiety is that a child feels insecure and fearful when they are on their own. The anxiety is not limited to bedtime and often occurs during the day in a variety of situations. Here are the DSM-5 (the Diagnostic and Statistical Manual of Mental Disorders, 5th Edition) criteria for the diagnosis of Separation Anxiety Disorder. Note that each Category (A,B,C and D) must exist to make the diagnosis.

A. Developmentally inappropriate and excessive fear or anxiety concerning separation from those to whom the individual is attached, as evidenced by at least three of the following:

1. Recurrent excessive distress when anticipating or experiencing separation from home or from major attachment figures.

2. Persistent and excessive worry about losing major attachment figures or about possible harm to them, such as illness, injury, disasters, or death.

3. Persistent and excessive worry about experiencing an untoward event (e.g., getting lost, being kidnapped, having an accident, becoming ill) that causes separation from a major attachment figure.

4. Persistent reluctance or refusal to go out, away from home, to school, to work, or elsewhere because of fear of separation.

5. Persistent and excessive fear of or reluctance about being alone or without major attachment figures at home or in other settings.

6. Persistent reluctance or refusal to sleep away from home or to go to sleep without being near a major attachment figure.

B. The fear, anxiety, or avoidance is persistent, lasting at least 4 weeks in children and adolescents and typically 6 months or more in adults.

C. The disturbance causes clinically significant distress or impairment in social, academic, occupational, or other important areas of functioning.

D. The disturbance is not better explained by another mental disorder, such as refusing to leave home because of excessive resistance to change in autism spectrum disorder; delusions or hallucinations concerning separation in psychotic disorders; refusal to go outside without a trusted companion in agoraphobia; worries about ill health or other harm befalling significant others in generalized anxiety disorder; or concerns about having an illness in illness anxiety disorder.

The underlying problem here is that a child has experienced a seriously traumatic event, such as physical abuse or a life-threatening accident. If the issue has not been resolved, frightening images related to the event will commonly resurface as the child is falling asleep causing anxiety in the child at bedtime.

This is by far the most common reason for children being afraid to sleep alone. Based on descriptions from my patients over the years, there are 7 common fears that are the source of most nighttime anxieties ...

The 7 Common Bedtime Fears in Children 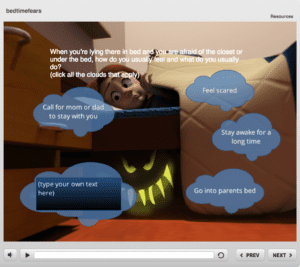 As you can see, Separation Anxiety Disorder directly relates to both the fear of being alone and the fear of waking in the night. Post-Traumatic Stress Disorder relates to the fear of bad dreams or scary stories, although the scary dream or story in the case of PTSD is based on a real event.

Most often, however, the child who is afraid to sleep alone has a specific fear and nothing more. Scary videos or movies, creepy stories told by other children, news about deaths or traumatic events, frightening weather, bad experiences, etc, can all trigger bedtime fears.

The Usual Advice (What Works and What Doesn’t)

In searching for advice on the Internet I found the following strategies, which I have listed below along with my recommendations:

What Your Child Really Needs

Your child’s brain is incredible. Children are capable of learning much much faster than adults. They are able to use their imaginations in new and creative ways and with far greater ease than you or I. It’s like they possess a powerful supercomputer .. but have no idea how to really use it.

My goal is to help your child utilize that untapped mental resource to help them feel strong and confident when lying in bed alone. I want them to come up with their own effective strategies for achieving their goal .. sleeping comfortably on their own with no anxiety.

Therefore, I developed the interactive Bedtime Hero program that takes your child through the same step-by-step therapy method that I use in my office.

Bedtime Hero is an interactive online therapy program in which my voice guides your child through a series of steps with Disney-like animations. Your role is to assist and support your child as they work through the process.

Bedtime Hero uses the same series of therapeutic steps that I use with children in my office. My clinical research revealed that over 90% of my child patients with bedtime anxiety achieved significant improvement within 6 sessions using this method. 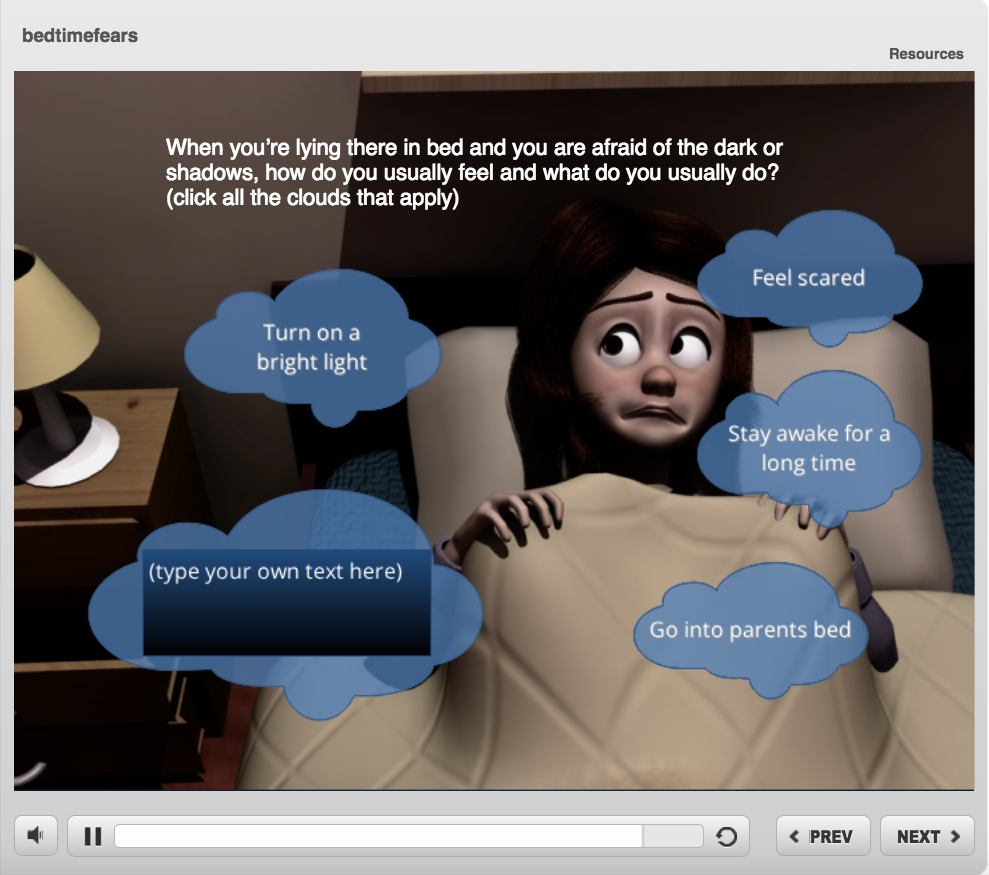 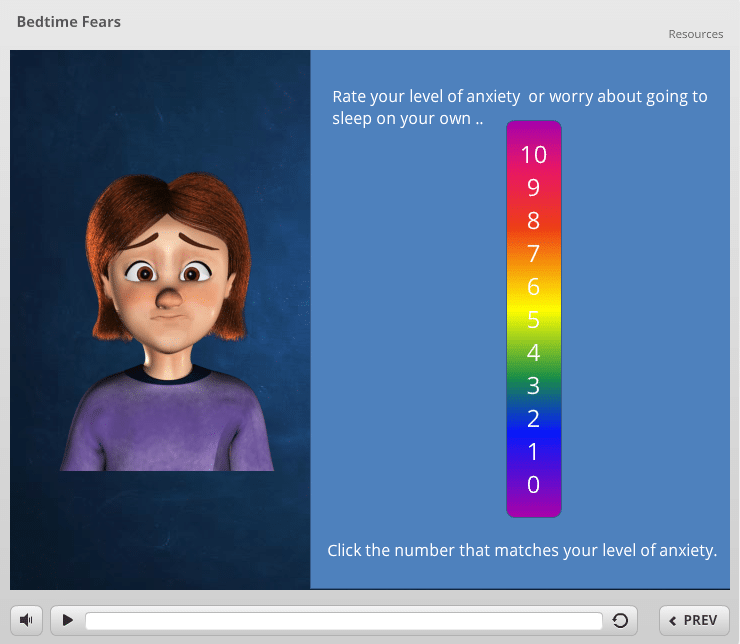 Other websites may talk about the importance of involving your child in the solution, but the strategies they describe often put the onus on you, the parent, to make things happen.

The key to this program is that it engages your child in actively solving the problem themselves. They become invested in the process and own their success. When an idea comes from within a child it has a much stronger effect than any idea coming from a grownup.


* Your email address will not be shared with anyone.

Dr Mark Lauderdale is a child psychiatrist in private practice in Victoria BC, Canada. He has had over 30 years experience working with children and adolescents using a variety of therapeutic methods including psychotherapy, hypnotherapy, Eye Movement and Desensitization and Reprocessing (EMDR), Cognitive Behavior Therapy (CBT), motivational psychology, medication and family therapy. He specializes in helping children with fears and anxiety disorders.